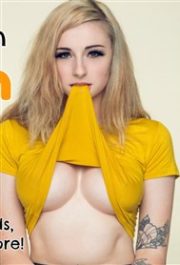 I’m Kayla Erin and I was born on the 16th of August 1996. I grew up in the Capital of Australia – Canberra. Here’s a little summary about me and how I got into this mess.

I was a crazy, creative and stubborn child. Seriously, shout out to my mother for not smothering me in my sleep. Although I’ve mellowed out I still wont’ take shit from people and love to speak my mind.

I grew up playing video games with my older brother. We loved games like Kingdom Hearts and Mashed on the Play Station.

As soon as I was old enough to get a job, I started at McDonald’s and ended up working there for 4 and a half years. Working there was either really fun or you were miserable however, I learnt a lot of valuable lessons there that I still use today.

At age 15 I was in hospital because I was having headaches, chest pain and dizzy spells all the time. I ended up spending a lot of time in hospital trying to figure out why this was happening. It turned out that I have a colloid cyst in the third ventricle of my brain. I was almost not graded in year 9 for being away so much from school. During this time I would spend my days on YouTube which is when I discovered a channel called Fighting Dreamers Pro. They were dressing up as characters from Naruto and Kingdom Hearts. At first I thought they were a part of some weird religious group but it’s out they were just cosplayers.

Inspired by Twin Fools, my first ever cosplay was of Naruto! I also went on to cosplay other male characters such as Ciel from Black Butler and L from Death Note.

Since I was a little girl, I loved powerful women who wore sexy outfits and had big boobs. As I got older, my taste in cosplay changed and I wanted to do more revealing outfits. I figured that I too, could dress up like a powerful, sexy woman with big boobs. Also that I was super gay.

After graduating, I worked for the Australian Government doing data input. At the time I was unaware that I had ADHD and I’m surprised I was able to keep my job as I found it incredibly hard to concentrate.. I would talk to my work mates instead so much so they put me in a desk facing the wall.

During this time a friend convinced me to start my own Patreon. I was very hesitant at first because I didn’t think it was something people wanted from me. But thanks to the amazing supportive people who follow me, I was proven wrong and it was a huge success and shortly I was able to quit my job.

It’s been a huge goal of mine to not only have cosplay as a hobby but also a job.

I feel like what I do is perfect for me. I’m able to not only dress up and be creative but also learn about advertising in social media and the business side of things. I would love to properly study business one day.

I love being my own boss and not having any rules or being too controlling . I can even write fuck in the title of my own about me, it’s great!

During the past couple of years I’ve been able to travel to conventions all over Australia and now to international conventions as well. I’ve had to opportunity to meet the most interesting and wonderful people from around the world and it’s all thanks to cosplay.

Canberra to be in Brisbane with family and warmer weather.

Also the gloomy weather in Canberra makes you feel sad.

my life named Mia and Rosie

Thanks to my best friend Tahlee who introduced me into Twitch,

I have started streaming as well. It’s the perfect blend of getting

dressed up, playing video games, being social all while not

having to leave your house! I really try to be as genuine and

funny as I can. My absolute favorite thing to do is make people

laugh and I hope to continue it in many years to come!

That’s it for now, I hope you enjoyed all my grammar and spelling

mistakes. I’m sleepy and had to rewrite all of this because

the first lot was deleted…